Men who prefer electric razors over traditional ones have a wealth of options. It can often be difficult to choose between the hundreds of different shavers on the market. In this article, we will take a close look at one popular model, the Remington F5-5800 foil shaver, and put it up against other, similarly priced electric razors. We will examine the performance of each razor as well as its features, battery life, durability, and comfort. Is the Remington F5-5800 a winner, or will one of its competitors take the crown?

The Remington F5-5800 is a high-powered electric razor that, while basic when compared to higher-priced shavers, has some nifty features of its own. It’s a heavy-duty piece of hardware with some real heft to it, yet it’s affordable, coming in at a mid-range price. This makes it an ideal pick for men who want a real-deal electric shaver that can power through the thickest of beards but don’t want to empty their bank account for it.

The Remington F5-5800 features a dual-foil design for its head, and it comes equipped with a function Remington has dubbed Interceptor Shaving Technology. This is essentially an added trimmer that rests between the two foils, clipping longer hairs down to stubble length before the foils finish the job.

This, combined with the pivot and flex technology in the razor’s head, helps ensure a smooth and close shave every time you use it without having to run it across your face over and over. It also prevents hairs from catching in the foils and causing pain and irritation.

When it comes to the battery, the Remington F5-5800 has a couple more tricks up its sleeve. The battery itself runs for 60 minutes on a full charge, which it can reach in just two hours. If you don’t have two hours to wait, however, it also has a five-minute quick charge function that will give it enough juice for a single shave.

This is a lifesaver for any man who has ever had to stop mid-shave and plug their electric razor in for a nice, long charge. In addition to this feature, the Remington F5-5800 has a light-up battery icon included as part of its design, allowing users to keep an eye on the battery level. If you need to shave while the shaver is charging, this is one of the surprisingly few electric razors that can run while plugged into an outlet.

The Remington F5-5800 also comes with a built-in pop-up trimmer on the back that can flip out to complete detail work on sideburns, beards, and hard-to-reach and sensitive areas. All of these components are easy to wash with warm water after each use.

Are there any issues with the Remington F5-5800? As mentioned above, it’s a high-powered beast of a shaver, which renders it a little louder and heavier than some might like. All that horsepower also won’t protect it from moisture, either; the F5-5800 is not meant for wet/dry shaving and should be kept out of the shower.

In addition, that power can result in irritation for men with a combination of thick facial hair and sensitive skin. If you have a light beard and can get away with shaving every other day though, this razor might be the one for you.

​The Remington F5-5800 is available on Amazon for around $47. The other shavers we reviewed run between $45 and $110, depending on their quality and how new they are on the market. 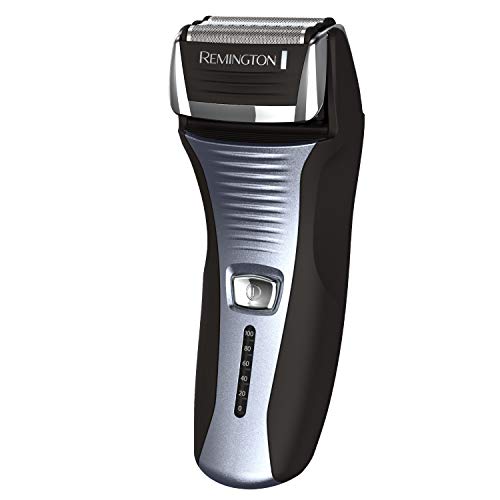 The Remington F5-5800 is built for power. It’s sturdy and can make short work of even the thickest facial hair thanks to its Interceptor Shaving Technology. The battery life is standard, but the charging time is stellar for a razor in this price range.

The battery is improved further by the handy five-minute quick-charge function. It loses a few points thanks to its heaviness and loud motor and the fact that it’s not ideal for men with coarse hair types and sensitive skin.

Remington offers a two-year limited warranty for defective products, which is a solid warranty for a product in this price range. 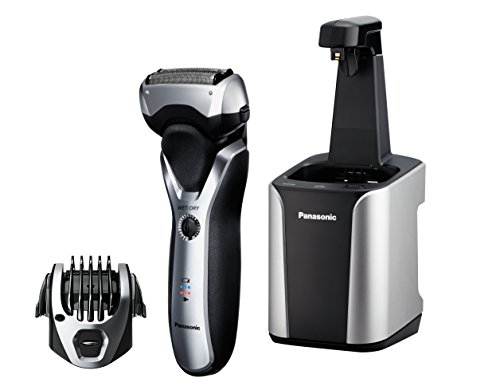 The Panasonic ES-RT47-S Arc3 is a combined electric shaver and trimmer that features three hypoallergenic foils to give users a close shave and a five-setting snap-on comb attachment that makes trimming a breeze. It has a 10,000 rpm motor that still manages to be quiet, and its battery can run for 50 minutes after getting to full charge in just one hour.

Users can shave dry, in the shower, or using foam or gel, and the Arc3 is also easily washable; just a few seconds under warm water will clean it out so it’s ready for its next use. Like the other shavers featured in this article, it has a pop-up trimmer on the back and an LCD display showing how much battery life is left.

If there are any drawbacks to the Panasonic ES-RT47-S Arc3, it is likely the price and the blades themselves. This is the most expensive razor on our list, and blades, while sharp coming out of the box, dull rather quickly. Some users report having to replace them once every six months or so, which adds more cost on top of this already-expensive electric shaver.

The 10,000 rpm motor packs a real punch, but the design of the head itself is just as impressive. The blades are at a 30-degree angle, helping them trim hair right at the base of the hair. The pivoting head follows the contours of your face, making for a smooth, easy shave. In addition to the clip-on comb attachments, the Arc3 features a pop-up trimmer on its backside for easy access.

Its fast charging time, decent battery life, wet/dry shaving options, and easy-to-wash nature make it a reliable workhorse shaver; though users might find that the blades dull rather quickly. Some users report having to replace them as often as once every six months.

Philips Norelco has a wide range of shaving products, but the 3100 electric shavers might be their best product in this price range. It doesn’t offer much in the way of frills, but its three-head design means it’s easy to get a close shave even in difficult spots like the neck or jawline.

The 3100’s ComfortCut Blade System features rounded edges on the heads to help them glide more smoothly over the skin, protecting users from nicks and cuts. There’s also a built-in pop-up trimmer on the back for easy maintenance of sideburns and the like, and it’s easy to wash: just pop the top off and rinse it out.

The battery is a major drawback for the Philips Norelco 3100. Despite being a similar price to Remington’s electric razor, it simply can’t compete. The lack of waterproofing is also disappointing, although not as much of a drawback for most men.

One other issue with the design of the 3100 is that it tends to build up hair and debris inside it, requiring the occasional deep clean. If you’re not comfortable taking the razor apart to clean its components every once in a while, this might cause mechanical issues down the line.

The Philips Norelco 3100 does come with a couple of significant drawbacks, though. While it packs a lithium-ion battery just like the Remington F5-5800, the 3100’s take a whopping eight hours to charge for just forty-five minutes of use. Remington’s shaver charges much faster and offers more shaving time per charge. In addition, the Philips Norelco 3100 lacks the Panasonic ES-RT47-S Arc3’s wet/dry functionality: you definitely won’t want to take this one in the shower with you. Still, for the money, it’s hard to go wrong with this product. Like Remington and Panasonic, Philips Norelco offers a two-year limited warranty on the 3100.

Kissliss may not have the name recognition of the other brands on this list, but can its KLS7110 blow the competition out of the water? The price is a good start, coming in at around ten dollars less than the next-cheapest option on this list. It shares the three floating head designs of the Philips Norelco 3100 but adds an IPX7 waterproof rating, which means it can be used in the shower or with gel or foam.

It also packs an incredible battery that can charge in just one hour and provide a whopping two hours of use. This shaver is also the only one on this list that can be charged with a USB cable, making it ideal for traveling. Like the other shavers on this list, it features a pop-up trimmer on the back and an LCD display showing users how much battery life is remaining.

There are some standout features on the Kissliss KLS7110. The two-hour battery life on a single one-hour charge tops this list, and a wet/dry shaver at this price is a great option.

So what’s the catch? Unfortunately, some users report a poor build quality that results in the Kissliss KLS7110 breaking after a few months of use. Users with sensitive skin may also find that the blades irritate their skin. The battery is incredible, but that low price comes at a cost. The ability to charge via USB makes this an excellent travel razor; you won’t have to pack an extra charging cable for it. However, the seemingly spotty build quality and the fact that users with sensitive skin might find the blades irritating offset some of these considerable assets. Kissliss offers a 15-month warranty on the KLS7110, which is considerably shorter than the competition’s warranties. Couple that with reports of the KLS7110 breaking and some users claiming Kissliss’s customer service is unresponsive and you get the weakest warranty of the bunch.

​As you can probably guess, we cannot declare a clear winner in this matchup. Each of these electric shavers has its pros and cons, and each will be right for different users. The Remington F5-5800 is a top-notch mid-range electric shaver with a good battery, excellent power, long-lasting blades, and the ability to power through the thickest of beards. If you want a solid razor that can do it all, Remington’s model is a great choice as long as you do not have sensitive skin, and we give it a solid four out of five stars in comparison with the competition.

The Panasonic ES-RT47-S Arc3 is the most expensive of the bunch and has a rather weak battery, but it is a reliable shaver with the wet/dry functionality that Remington’s product lacks. The Philips Norelco 3100 does not feature wet/dry functionality, but is also less pricey than Panasonic’s shaver and is probably the most comfortable razor to use on this list.

Finally, the Kissliss KLS7110 may seem to get the short end of the stick, but the low price and wealth of features make it more than worth a look. The ability to charge it with a USB cable makes it an ideal travel razor, and the price makes it easy to pick one up and keep it handy for trips while using one of these other products as your primary razor.