Are you that guy that goes into the big box retailer for your regular razor replacement? Don’t be that guy.

Instead, be the guy that wants quality in your razor with the expectation of a reasonable price. You want to be that guy.

With Harry’s razors, you can be the kind of guy that makes others take a second look, wondering if you see a barber for your perfect shave.

The Cost of Harry’s Razor 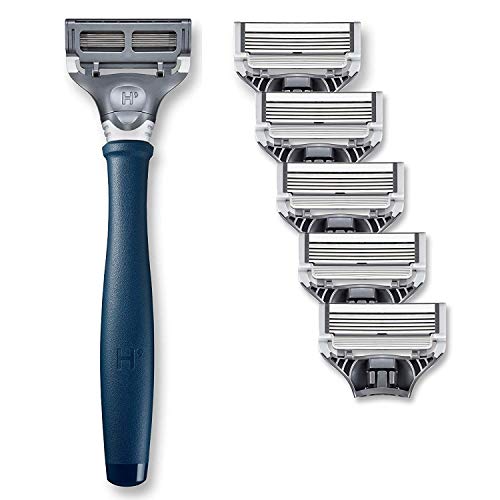 The starter kit that you get with Harry’s is a mere $3 to cover shipping and handling. In it, you’ll get the handle, a blade, and a few other things. Sounds like a pretty good starting investment.

Even at that cost, Harry’s is still less expensive per blade, so it’s clearly worth the money.

With Harry’s, you can opt for a subscription plan that you set at varying lengths. It’s easy to adjust, too, and you can change the length of time via your personal portal on their website. That makes it convenient, too.

If you decide to cancel at any time, you can also do that with the click of a button. Just click and you’re done.

Marketing is superb. The packaging makes you believe you’re joining the elite ranks of having proper razor tiers above your basic disposable.

Presentation is important, and Harry’s hit the nail on the head with theirs. Their packaging is sophisticated and makes you feel like being part of Harry’s razor club is a luxury.

Inside the starter kit, you’ll find a razor handle, two blades, a travel cover for your blade, a bottle of shave gel, and a few other samples for you to try out.

Something to think about is the plastic travel cover – if you have kids, this is a great way to have peace of mind.

You’ll feel better about the kids avoiding accidentally cutting themselves if they reach for it or it falls on the floor. Another bonus of the cover is that it is fully ventilated. You can’t say the same about other razor covers.

Harry’s razor is razor-sharp for sure. The handle is made to feel great in your hand and is best described as being of a refined, minimalist design. Each cartridge refill has 5 blades.

If you happen to try out the post-shave balm, you’ll love that, too. The scent is not overwhelming like so many others out there, but it smells great and feels wonderful, without the alcohol shock you might experience from other aftershaves.

The Not So Good Stuff About a Harry’s Razor

Just about everything good has some stuff about it that’s not so good, right?

With Harry’s, there are some less than stellar points, too.

So while the blades are super sharp, the placement of the blades leaves something to be desired. If you want an incredibly precise shave like when you’re trying to get crisp trim lines, you’re going to have a hard time with Harry’s razor.

Keep in mind that if you have a beard that you like to keep clean and trimmed, this razor will make it difficult to keep the lines straight.

If you have coarse hair on your face that needs to be trimmed and shaved pretty often, you probably go through at least a blade a week or every other week.

Once you hit the point of needing to replace the blade, the last shave you experience is probably not the best shave. In fact, it more than likely feels like you’re dragging it across your face and pulling at your skin in a quite unpleasant manner.

Fear not, for Harry’s razor is a cut above the rest in this department.

Your blade can last for up to a month with regular use according to some customers. If that’s the case for you, it’s well worth the reasonable price tag.

Harry’s is an excellent combination of quality and cost considering what you receive. If you decide to give them a try, you won’t be disappointed.

A Straight Razors Sale Is ALWAYS On Online