Founded in 1988, Edwin Jagger has swiftly become one of the most respected brands in the wet shaving industry. Headquartered in Sheffield, England, Edwin Jagger is a family-run business. The company now supplies handcrafted brushes, razors, and exclusive lotions around the world. Anyone out there interested in finding the best Edwin Jagger safety razor for their shaving routine should check out this list.

Below, we’ll go over some of the hottest Edwin Jagger razors on the market. Note, the razors in this list are arranged from the most affordable to the most expensive. 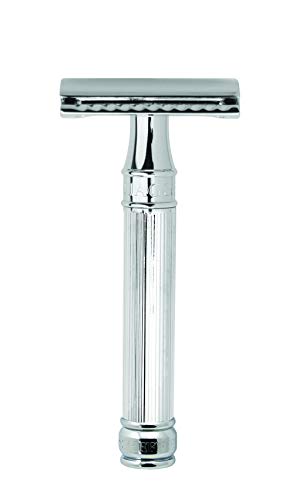 The best Edwin Jagger safety razor for the price is the standard double edge safety razor. You can pick up this remarkable chrome-handled razor for just $28 at most online retailers. Although you’ll receive five free Derby blades with your purchase of this razor, you don’t need to feel to rely on Derby blades. Edwin Jagger execs say you can easily fit any standard double edge blade into this razor’s convenient head.

This razor’s handle is expertly balanced for as comfortable a shave as humanly possible. Official measurements of this product are 3.7 x 1.6 x 1 inches, and it weighs 2.72 ounces. Everyone who orders this double edge razor also gets an information card. This fact sheet tells you everything you need to know about proper wet shaving technique.

There are well over 3,000 positive reviews of this razor on sites like Amazon. Most reviewers say this is a superb double edge razor for men just getting into wet shaving. Anyone on a budget who wants to start wet shaving with a trusted, high-quality razor should seriously look into this product. 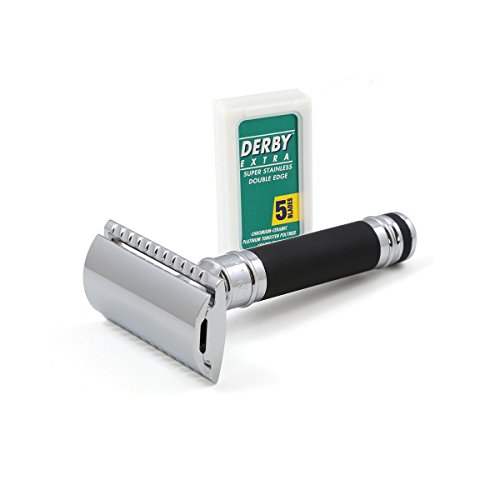 Do you have a problem with safety razors always slipping out of your hands? Well then, maybe you should look into Edwin Jagger’s Double Edge Safety Razor With Black Rubber Coated Handle. Just like the traditional double edge razor, this razor’s handle measures 3.7 inches long, and the entire razor weighs approximately 2.7 ounces.

The distinctive feature of this razor blade is that the handle has a waterproof black rubber coating. Out of almost 4,000 reviews, this safety razor has an average score of 4.5 stars online. You’ll also receive an instructional card and five complimentary Derby blades with this razor. The average price for this razor is $40. 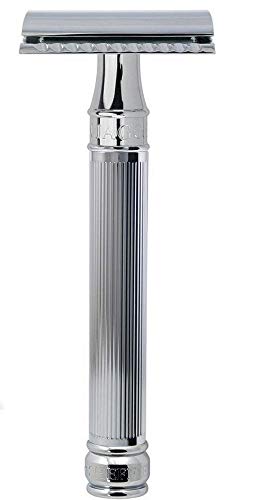 Men with larger hands might want to consider investing in the Edwin Jagger Double Edge Razor With Long Handle. This razor’s handle measures 4 inches and the entire product weighs 5.3 ounces. As you can see, the handle is a bit longer and the traditional razor, plus it has a bit more weight.

This is an ideal razor for men who like the feel of a weighted razor and just can’t get a good grip on smaller handles. Like almost all other Edwin Jagger razors on this list, you’ll receive your product in a nice box with an instructional card and five complimentary razor blades. 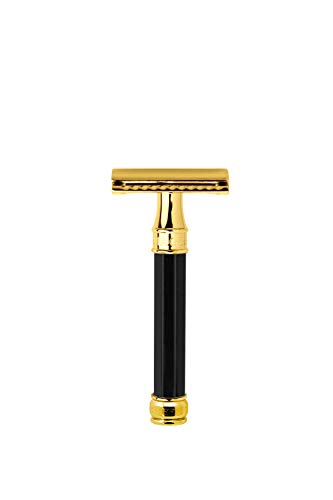 Have you got a bit of money to splurge on a decorative razor? If so, definitely look into the Edwin Jagger Octagonal Black & Rose Gold Double Edge Razor. Yes, you read that right; this razor is actually made with 18-carat rose gold!

The handle on this razor blade has a black rubber covering. As a result, you won’t have to worry about it slipping out of your hand. Basically, this is no different from the double-edged razor with a rubber handle we listed above, except for the gold, of course. The official dimensions of this product are 2.2 x 2.2 x 5 inches and 4 ounces. Since this is obviously a vanity/decorative purchase, expect to pay a premium. Average prices for this blade hover around $82. 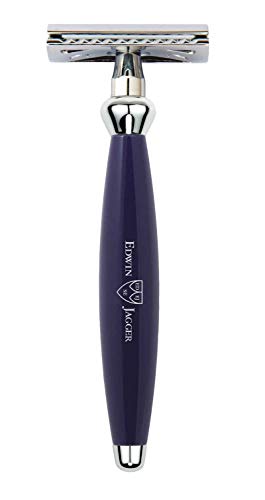 A new line of razors in Edwin Jagger’s extensive catalog is called Bulbous Range. Probably the best Edwin Jagger safety razor in this catalog is the Blue Bulbous Double Edge Safety Razor. As you could tell from the name, the razor’s handle is blue with the Edwin Jagger logo clearly listed in the center. This polyester handle is attached to a collar and end cap that both have three layers of chrome plating.

The handle measures 3.4 inches and the entire razor weighs approximately 2.25 ounces. Everyone who orders this special razor blade gets five complimentary Feather razor blades. In case you didn’t know, Feather is a Japanese company that has a reputation for producing some of the sharpest blades in the industry.

Don’t use these Feather blades unless you have a great deal of experience with wet shaving beforehand. You can pick up this product on Edwin Jagger’s official website for $88. 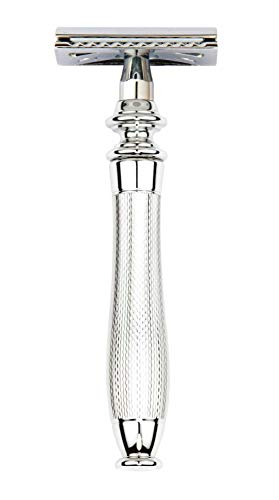 New wet shavers are sometimes surprised to learn that Edwin Jagger is an official Gillette Trusted Partner. There are actually quite a few products in Edwin Jagger’s catalog that use materials from the powerful American company Gillette. One of the most lauded of these razors is the Edwin Jagger Chatsworth Barley Fusion Razor.

Each one of these razors weighs 3.17 ounces and has a sturdy 3-inch handle. The base of this razor is made out of brass and is then covered with layers of nickel and copper. The outermost layer is made of blue and white chrome and features a handcrafted barley pattern.

Edwin Jagger executives say this barley pattern is waterproof and helps users grip. Everyone who buys this razor on Edwin Jagger’s website gets one complimentary Gillette Fusion Proglide blade. You’ll have to pay around $146 to get your hands on one Chatsworth Barley Fusion Razor.

What’s The Best Edwin Jagger Safety Razor For You?

Astra Razor Blades Review – One of the Best Blade Brands?

Ultimate Guide On How To Pick Your Wet Shaving Products