Way back when, there was the straight razor. It was a strip of thin, hardened steel, usually with a decorative handle, and it had to be sharpened frequently with a stone and then buffed with a leather strop to realign the edge. This was a dangerous blade and learning to shave with it took some skill. So, about the turn of the last century, the safety razor was invented. Then there comes the new breed and with that we'll discuss the best double edge razor for you.

The safety razor was a huge advancement, as it featured a handle and a small head at a right angle. The head would hold the blade itself, with only the edge peeking through under a comb. Before long, the double-edged razor blade was invented, giving shavers twice as much mileage out of a single blade.

What Is The Best Double Edge Razor?

So, now that we’ve discussed designs, what is the best double edge razor? 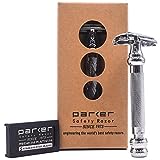 ​Substantial and well-made, the Parker 99R is a closed straight bar razor that features a butterfly-style head and a heavy 3.4 ounce weight. Its chrome-plated knurled brass handle and head have a timeless, traditional look, making it a solid choice and a razor you will want to keep around for years to come. 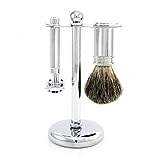 ​Clean and pristine, with a chrome finish, this Edwin Jagger razor is a nice balance of size and weight. Its three-piece design is well-made and easy to clean, and its less aggressive shaving qualities make it a good pick for someone new to safety razors (or anyone with sensitive skin). 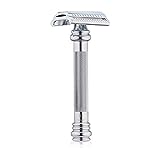 With its long handle and brilliant nickel-plated chrome, the Merkur looks like a safety razor your grandfather might have used decades ago. Its closed comb helps make it easy to shape and remove unwanted hairs from a beard, and its two-piece design is well-made and precise. 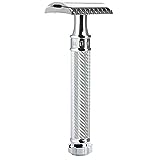 Sleek and modern, the Merkur 38Hd is an aggressive razor that can handle the toughest beard with ease. With an open comb and three-piece design, it’s easy to clean and keep maintained, and it can deliver a barber shop shave on most beards with only one pass. 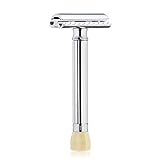 ​With a longer handle and adjustable feature, the Merkur Progress is a bit more innovative razor design. Its five settings can be controlled at the handle, from less aggressive to most aggressive (1 through 5). Many find the longer handle a little easier to manage, with better control and handling. This is one of the more aggressive double-edged razors around, and may not be a good choice for beginners or those switching over to a wet shave and safety razor.

Japanese craftsmanship is on display with this beautiful razor from Seki. It’s fashioned from 316 surgical stainless steel, with chrome plating and a matte finish. It’s a three-piece razor with a heavy 3.2 ounce weight, and is not an especially aggressive choice.

It is available in four designs:

Switching Over To a Double Edge Razor

If you’re used to a disposable or other type of razor, it may take some getting used to. There’s a different technique involved and a different type of pressure, and many find it takes awhile to “train” your beard for one. That being said, many men have found that a double edge razor can deliver a closer, smoother shave with less irritation – and of course there are plenty of shaving products that go along with this switch, such as shaving soaps and accessories.

Astra Razor Blades Review – One of the Best Blade Brands?

Finding the Best Badger Hair Shaving Brush on the Market